The ninth annual World Autism Awareness Day is April 2, 2016. Every year, autism organisations around the world celebrate the day with unique fundraising and awareness-raising events. 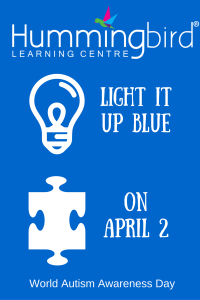 In May of 2014 new diagnostic criteria for Autism were published in DSM-5.  The diagnostic criteria were changed in order to get rid of some of the variance in the way children with autism are diagnosed and get treatment.  Autism is still considered an umbrella diagnosis but the separate diagnosis of Aspergers, Autism, PDD, PDD-NOS and Retts are no longer used. Now a child who may previously have been diagnosed with Aspergers under the old DSM-4 criteria would now be diagnosed as Mild Autism, while a child with Retts Syndrome would be said to have Severe Autism.

Under DSM-5 criteria, individuals with ASD must show symptoms from early childhood, even if those symptoms are not recognised until later.  This criteria change encourages earlier diagnosis of ASD but also allows people whose symptoms may not be fully recognised until social demands exceed their capacity to receive the diagnosis.

We celebrate World Autism Awareness Day by wearing blue.  By wearing blue we show the world that we value diversity, that everyone has something to contribute and that supports are available. By celebrating the day, we can change people’s perceptions of what it is to be born with autism. At Hummingbird Learning Centre, many of our Hummingbirds are on the autism spectrum and they to us bring a unique perspective on life.  I often think that autism is simply a different filter though which we interpret the world and once we understand each other’s filters then communication becomes much easier.  That is why I love the autism logo of the jigsaw piece as I think it symbolises the connection between the autistic and non-autistic worlds.

Elaine Sparling is the CEO of the award winning Hummingbird Learning Centre®. Based in Adare, Co Limerick and Tralee, Co Kerry, she works with clients on a one to one basis and can be contacted on 087-2996054 or through their website www.hummingbirdlearning.com. They are currently developing a week long Irish Course for summer 2016. The online version of their popular workshop The Secrets to Successful Spelling™ is available through their website and Facebook page and they have launched their Study Success Program™ for second & third level students.