School & Your Child with ADD / ADHD

ABA is used as an Autism Intervention, But What is ABA?

ABA or Applied Behaviour Analysis is most commonly known in Ireland as an intervention for people with autism but did you know that ABA was not designed specifically for autism?

Applied Behaviour Analysis is the science of human behaviour. The best definition available is by Baer, Wolf, & Risley in 1968: ‘Applied Behaviour Analysis is the process of systematically applying interventions based upon the principles of learning theory to improve socially significant behaviours to a meaningful degree, and to demonstrate that the interventions employed are responsible for the improvement in behaviour’.

Specifically, ABA involves the principles of learning theory. That is, the use of reinforcement and other important principles to increase behaviours,generalise learned behaviours or reduce undesirable behaviours, is fundamental to ABA.

It was not until the 1960s that researchers began exploring Applied Behaviour Analysis as a method to educate children on the autism spectrum. Behavioural analysts agree that consistency, in and out of the classroom, is key in order for children with autism to develop to their greatest potential. It is vital that teachers and parents using ABA evaluate the interventions to determine their efficacy and make changes as needed to insure consistent and ongoing progress.ABA programs and interventions should focus on outcomes for the learner that will have socially significant consequences to a meaningful degree.

There are many different teaching strategies that are used under the umbrella of Applied Behaviour Analysis. These include shaping and chaining behaviours along with specific teaching strategies such as discrete trial instruction, pivotal response training, incidental teaching, fluency based instruction and many more.

The first step in Applied Behavior Analysis is to analyse the behaviour. This is done using the ABC model:

A – Antecedent – a directive or request for the child to perform an action.

B – Behavior – a behavior, or response from the child i.e. successful performance, noncompliance, or no response.

C – Consequence – a consequence, defined as the reaction from the therapist, which can range from strong positive reinforcement (ie. a special treat, verbal praise) to a strong negative response, “No!”

The following are some of the techniques used in ABA

Chaining: the skill to be learned is broken down into the smallest units for easy learning. For example, a child learning to eat independently may start with learning to unscrew a jam jar lid. Once the child has learned this, the next step may scooping the jam out with a teaspoon, and so on.

Task Analysis: a process in which a task is analysed into its component parts so that those parts can be taught through the use of chaining: forward chaining, backward chaining and total task presentation. 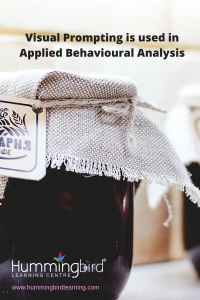 Fading: the overall goal is for a child to eventually not need prompts. This is why the least intrusive prompts are used, so the child does not become overly dependent on them when learning a new behavior or skill. Prompts are gradually faded out as the new behaviour is learned. Learning to unscrew the jam jar lid may start with physically guiding the child’s hands, to pointing at the jar of jam, then just a verbal request.

Shaping: is the gradual modification of an existing behaviour of a child into the desired behaviour. For example  a young child who only engages with their pet by hitting it. Although time consuming, the parents intervene every time the child interacts with the pet, grab their hand and turn the hit into a stroking motion. This is paired with positive reinforcement “It’s great when you are gentle with …!” and doing a favourite activity immediately afterwards as a reward.

Elaine Sparling is the CEO of the award winning Hummingbird Learning Centre®. Based in Adare, Co Limerick and Tralee, Co Kerry, she works with clients on a one to one basis and can be contacted on 087-2996054 or through this website www.hummingbirdlearning.com. We are currently developing a week long Irish Course for summer 2016.The online version of our popular workshop The Secrets to Successful Spelling™ is available through this website and on our Facebook page and we have launched our in house Study Success Program™ for second & third level students.