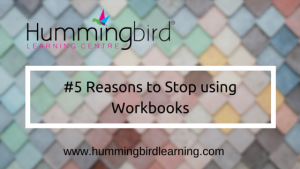 As an educator I feel that workbooks are overused and here are 5 reasons why I think we should stop using them:

Workbooks are expensive.  One of the biggest issues parents have is that they cannot be reused because they have been written in. This is particularly annoying when they have a younger sibling coming up behind and they have to fork out for another workbook.  I have noticed a trend by publishers to bundle a textbook and workbook together meaning that they can only be bought together.  On the flip side of the workbook being written in, I had a parent last week complaining that her only child’s teacher wouldn’t allow her class to write into the workbook.  The teacher had them write out everything in their copies (which encourages fine motor skills, see #3 later on).  This mum felt that the workbook was a complete waste of money because they weren’t using it as a work book.  It looks like the poor old workbook loses on all sides

Regular readers will know that I spent years working on a playground for my community. During that time I learned a lot about the psychology that goes into playgrounds.  Traditionally playgrounds were designed to be used in a particular way, you went up the steps to the slide and you slid down the front. It was designed that way and children were supposed to use it as it was designed. In other words you used it only in the way the creator had decided that you use it. That is prescribed thinking.

Nowadays, playgrounds are far more fluid and are designed to allow the children use them in both a prescribed and un-prescribed manner.  This different focus allows children to think for themselves, use their imagination and aid in decision and risk taking.

So what has this to do with workbooks?  Well, workbooks are an example of prescribed thinking.  The author leave blanks and you have to find the word that fills in that blank.  When used for reading & spelling based on phonics, strange words can sometimes be used to simply fit the phonetic example being learned.  There is little, if any, opportunity to move outside of the parameters prescribed by the author.  They children may learn the phonetic sound and learn off the spelling, but the meaning & context of words can be lost.  Without meaning and context, the child might be able to spell and read the word but have no ability to use that word correctly in the future.

In my experience, workbooks do little to hone fine motor skills.  Children are asked to fill in spaces.  Those spaces are designed to fit the publishers and graphic designers’ requirements and may not suit the individual child.  Workbooks promote print writing rather than joined or cursive writing.  There tends to be very little room for expansive writing and so workbooks can inadvertently discourage writing long sentences.  This slows down the important skill of putting one’s thoughts down on paper and holding and writing with a pen for longer periods of time.

Problem solving involves an element of risk taking.  It is a vital life skill and one that needs to be nurtured from the start.  Playgrounds are a wonderful example of how a child learns how to take risks. If we want a child to learn to solve problems we must create safe environments in  which they feel confident taking risks, making mistakes, learning from them and attempting again ( Fordham & Anderson 1992).

Workbooks typically have only one ‘right’ answer.  It’s a pass / fail system.  You either got it right or it’s wrong.  This type of activity can teach children that putting down a wrong answer means failure on their part.  It leaves little opportunity for the child to learn about taking risks by guessing or working through a problem in a logical manner.

Project Maths in secondary school places a lot of emphasis on problem solving, yet in primary school the proliferation of maths workbooks could actually be an inhibitor.

In communication, flow is defined as the continuous, uninhibited, eloquent expression of thoughts or ideas in speech or writing.  In order for flow to occur, one needs to be able to expand.  Workbooks, by their nature, constrain flow.  The child must follow exactly the prescribed thinking of the author, and so looks to answer that question only.

As the child moves into secondary school, they now have to expand their answers, give their opinions and back them up with quotations and reasoning.  The child who was very diligent with their workbook, can really struggle with this new requirement.  I frequently see report cards from teachers saying that the answers given on the tests were too short and lacked detail.  I feel that workbooks contribute to this.  The children were trained to be brief, to answer in a prescribed manner and not give their own opinions.

Workbooks do make life easier for teachers and I do believe that used sparingly they can be useful, however when parents feel that they are too expensive and the overuse of them can actual limit children, perhaps teachers, authors and publishers could design alternatives.

If you feel you, or someone you know, could benefit from one of our programs just email me on elaine@hummingbirdlearning.com