I remember starting secondary school and having to choose a second language to learn. Our choice was supposed to be either French or German but so few chose German that there wasn’t enough to fill a class. And so our year gained the dubious distinction of being the only year where everyone who chose to study a second language did French.

I say  a ‘second’ language, but of course, it was our third language. We all had been learning a second language, Irish, since junior infants (or low babies as we called it back then). Here is Ireland, we are very fortunate that learning a second language has always formed part of our curriculum because recent research has proven that there are many benefits to our brain, both physical & cognitive when a person is bilingual.

Yes, that’s right – I did say ‘fortunate’. And yes I also know, that many of you did not feel one bit fortunate when learning the dreaded Modh Coinníollach. When I say ‘fortunate’ I am talking about how much better a bilingual brain works compared to a monolingual brain.

Language ability is typically measured in 2 active parts – writing & speaking,  and 2 passive parts -listening & reading. Our brain is physically divided into two hemispheres. The Left side is generally considered to be the logical and analytical side while the Right side tends to be more active with our creative, emotional and social skills. Of course, this is a broad stroke definition; both sides of the brain deal with all of the above but to varying degrees.

Language formation requires the use of both sides of the brain. According to the Critical Period Hypothesis, children develop language skills more easily than adults because, as their brain is still growing, its neuroplasticity allows them to more easily use both hemispheres in language acquisition. As we get older lateralisation to one hemisphere occurs and for language acquisition that tends to be to the left. This would explain why when a family moves to a new country and has to learn the local language, the children tend to learn it a lot more naturally and easily than their parents. 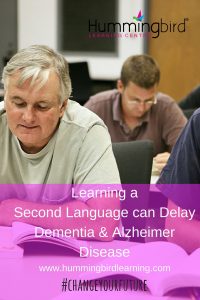 The ability to speak and understand more than one language brings many remarkable advantages. Using modern technology, researchers have found that being multi-lingual has a physical effect on the brain. The grey matter is denser and there is more activity in certain regions when a person is using their second language. Switching from one language to another requires a lot of brain power and scientists have found that this extra activity can even help to delay the onset of dementia and Alzheimer disease by up to 5 years!

Irish has always been taught in Irish schools and the language has suffered from poor teaching practices along its association with the poverty and difficulties of the past.  In addition, up until the 1960’s the commonly held view of  experts was that bilingualism actually slowed a child’s development because it forced them to spend too much energy distinguishing or translating between languages. Current thinking is that, while sometimes a bilingual child may take a little more time when given a task to translate, rather than slowing development it can actually increase activity in the prefrontal cortex.  This brain region has been implicated in planning complex cognitive behaviour, personality expression, decision making, and moderating social behaviour.

So learning a second ( or third , fourth, fifth or sixth) language is, in fact, an excellent way to exercise our brain. There are other advantages too. When learning another language, we tend to learn more about the culture and history of other people and places. It can foster a better understanding  that more unites us than distances us. Of course, it can also open up more opportunities to work and to travel.

Because, for the majority of us, Irish is already our second language, this means that learning Irish is actually good for us.

My uncle always wanted to learn Russian and so, after he retired he went back to university as a mature student. Armed with both his senior citizen bus pass and student card, he made his way into Trinity College Dublin each morning and gave his brain the mother of all workouts! As science discovers more and more about how our brain works, advances in understanding neuroplasticity means that learning another language is something that we can do at any age.