How to set up a really good Study Area

People with learning difficulties are, in my opinion, some of the smartest people on this planet. I know that sounds like a bit of a contradiction but it’s true. They are masters at disguising their difficulties and that that takes a lot of intelligence.

At Hummingbird Learning Centre, our initial main interaction is always with adults who either have learning difficulties themselves or who are parents of children who need our help.

The adults that we work with all have different, unique and at times heart-breaking stories but there is always one common thread that links each story together. It is the lifetime spent disguising their literacy difficulties and the huge amounts of energy that goes into hiding them. They feel like frauds, expecting every day to be caught out and exposed. By the time they contact me, they are usually physically & mentally exhausted.

It is totally different when I met children who are struggling at school. Most have had resource teaching but like the adults that they will become, they too have their ways of hiding their problems.

So here is what  I look out for when working with my clients, young and old. They are some of the coping skills that they develop to mask their real issues. Coping skills are a form of protection from their learning difficulties; even if sometimes the protection offered isn’t very good or productive. Usually, while the coping skill successfully avoids having to deal with the literacy issue, it tends to cause a hell of a lot of other problems!

I remember being at a seminar where one guy kept interrupting the speaker, giving his opinion. Someone leant over to me & whispered –‘ better to keep your mouth shut & let everyone think that you’re a fool rather than open your mouth & confirm it!’.

While saying that you don’t know something is a coping skill to hide the learning difficulty, it can actually cause even more problems for the person. They can be wrongly labelled as uninterested, lazy or stupid. 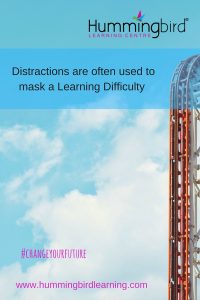 Going off topic is a great way to distract from a learning issue. Moving a conversation away from what might expose their difficulty is a much-favoured tactic of our clients. This can inadvertently lead other people to believe that they are unfocused or uninterested or time-wasters. Nothing could be further from the truth. They are totally focused on successfully moving the topic on to an area that they are comfortable with.  This is a coping skill that really works because they are so skilled at it, they can bring the focus of a conversation away from their pain point.

When I worked in a bank, a number of times I was asked in by people to fill out forms for them,because they had forgotten their glasses was staggering.  Of course, many were genuine cases of forgetfulness, but most were a cover up for limited literacy skills.

Parents tell  me stories of school books not being brought home, homework not copied from the blackboard and deadlines passing for assignments. This really is the ultimate coping skill – how can you do it if you don’t have the book?  Ok, the student has created a whole heap of other problems, but the goal here was to cope with the fact that they are struggling with literacy and by not being able to do the homework or assignment then they didn’t have to face up to the literacy issue.

As single acts, there is nothing to worry about. We all make mistakes and forget things at times. It is when a pattern starts to emerge then it’s time to look deeper into what is causing this ‘forgetfulness’. 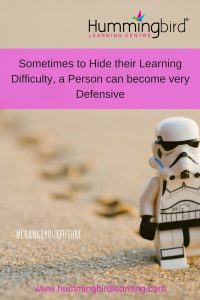 One lovely gentleman that came to us at Hummingbird Learning Centre and told me that he didn’t like the person he was at work. He was in a management position and was so terrified of being caught out in his literacy skills that he had created this bad-tempered persona which kept people away from him. He would pawn off reports to be written by other staff and bring homework to read at night so that he could keep ahead of what might come up the next day. He was wrecked from the pretence and fear.

A phrase that is gaining more traction in the US is Oppositional Defiance Disorder (ODD). It is a new diagnosis that is commonly seen with other learning disabilities. There is a lot of debate about it. I think had my lovely gentleman above been assessed for ODD he probably would be diagnosed as having it. Yet he himself admits that his anger and defensiveness was just a smoke screen , a way of coping with his fear of being exposed as having a learning difficulty.

Memorising in the Moment

This is a skill that the kids we see have in spades. They can learn almost anything off and be able to tell it back to you straight away. They don’t even wait to be asked – they just rattle it off. They hardly take a breath in their haste to get the words out, just prove that they know it and move quickly on.

When parents are under time-pressure (and what parent isn’t), asking the kids their spelling or tables, then this coping skill of the kids works a treat. I always watch out for kids not knowing the word or maths tables when asked out of order or in the middle of something else. Take care to give the child time to answer – never expect an immediate answer – but again watch for a pattern emerging of where they are only memorising in the moment. It may be hiding a bigger (but sortable) problem.

At times, we all use these coping skills and that is perfectly fine. It is only when a pattern begins to emerge that one should seek help to find out what the underlying cause or difficulty is.

For more on what we do and how we help adults and children with their literacy & learning skills contact Elaine Sparling on 087 2996054 or elaine@hummingbirdlearning.com