Homework and the Struggling Student

English spelling can be tricky, no doubt about it. There are rules and then there are the exceptions to the rules. There are the strange phonetic combinations that make up the sounds of words, which when the same letters are individually pronounced do not sound like the same word at all. And then there are words that are spelt the same but have different pronunciations and meanings! (For example I read a page every night (sounds the same as reed) and I read a page last night (sounds the same as red). One is the continual present tense while the other is the past tense).

So why is English spelling so tricky? To understand we have to go back to the origins of the language. Old English is almost indistinguishable from the language we speak today. It came from the Germanic root of languages as a result of the Anglo-Saxon invasions of Britain but we still use some old English words such as cow, swine and sheep. However, the words to describe the meat of these animals, beef, mutton and pork, are as the result of the Norman invasion. It is estimated that approximately 10,000 words were adopted by the English from the Normans.

French became the language of the aristocracy and the English court. This is why we still say Pardon and Excuse me! This French-infused English is known as Middle English and explains why we still spell words such as colour and centre in the French style. Chaucer’s The Canterbury Tales is probably the most widely known poem from that period. I found it recently in my old Leaving Cert poetry book ‘Soundings’. It needs to be read aloud in order to make any sense of it because it is very phonetic and there are times when the same word is spelt differently! 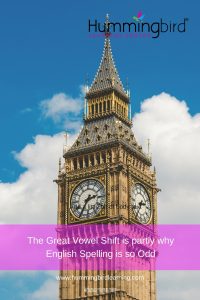 With the introduction of the printing press in the 15th century, English spelling became more standardised, albeit based on the pronunciation of the time. The change in how words were pronounced that moved us from Middle English to Modern English is known by linguists as the Great Vowel Shift. During this period, the long vowels of Middle English changed, for example, our modern pronunciation of the word bite would have sounded more like beet before the Great Vowel Shift. While the pronunciation changed (and this occurred over a period of a few hundred years), the spelling of words didn’t change.

That is why we have such variation in English spelling. There are different theories as to why the Great Vowel Shift occurred but because it emerged slowly over a long period of time we will probably never know the exact reasons.

What we do know is that it makes spelling in English a little tricky because words do not always look like they sound.

Some argue that we should look to the American way of spelling, which is somewhat more phonetic, as a way to enhance literacy. However, that raises the question of spelling in different accents and dialects. Should it be a free for all or do we need standardisation? I have to admit that I love reading Ross O’Carroll Kelly’s Saturday column and books. It is written in the so-called D4 dialect and the spelling helps to evoke the accent for the reader. Even if the reader was unfamiliar with the D4 accent, reading it aloud would conjure it up. Writing in that format is a tool that the writer uses to bring his characters to life and it works well in that situation. It would not work at all in others.

This is why going completely phonetic in our approach to spelling wouldn’t work. We would be back to the Middle English examples of lots of different spelling for the same word or else we would have to choose the dialect that best suited the word – and I cannot see that happening!

So we are resigned to the fact that spelling in English can be tricky. Tricky but not impossible. In my experience, complete dependency on phonetic spelling causes problems. But when combined with a visual spelling method such as the Hummingbird Learning Method®, then English spelling is no longer tricky, in fact, it is easy!