#5 Tips on How to Help Your Teenager Sleep

What to Do When Phonics Doesn’t Work

Executive Functioning Skills are important for ALL Children

#5 Tips on How to Help Your Teenager Sleep

As I write it is a glorious May day here in Adare. The sun was beating in my window very early this morning and last night we had a lovely long slow sunset as day eventually gave way to night. It was fabulous and reminded me my childhood and the arguments around bedtime and going to sleep. 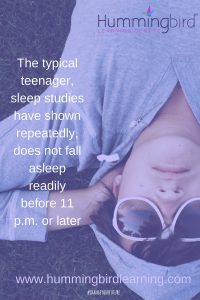 Our bedtime when I was in primary school was 7.30pm (my mother admits now that it was ridiculously early!). As a treat, we were allowed up until 8pm on a Friday. Of course, on days like today, 7.30 was like the middle of the day and we had no intention of going to bed – cue arguments.

Looking back I think that was where my love affair with reading in bed began, as I was wide awake in bed reading my Enid By

So, was my mother right putting us to bed so early? How much sleep do children need and why is it so important?

In one study, more than 90 percent of teenagers reported sleeping less than nine hours a night, and 10 percent said they slept less than six hours. As James B. Maas, a Cornell University psychologist and leading sleep researcher has observed, most teenagers are “walking zombies” because they get far too little sleep.

The typical teenager, sleep studies have shown repeatedly, does not fall asleep readily before 11 p.m. or later. Yet many have to get up at 7 a.m. or earlier to get to school. Most will start class at 9 am but many will not be fully alert by then and may be no condition to learn much of anything.

In 1998, before smart phones could be blamed for teenagers’ sleep deprivation, a study of more than 3,000 adolescents by two sleep specialists, Amy R. Wolfson of the College of the Holy Cross and Mary A. Carskadon of Brown University, found that high school students who got poor grades slept an average of 25 minutes less and went to bed 40 minutes later than those who got A’s and B’s.

In their laboratory study of 40 high school students in the United States ( where school starts a lot earlier than here in Ireland), Dr. Carskadon and her colleagues found that nearly half the students who began school at 7:20 a.m. were “pathologically sleepy” at 8:30 a.m. Calling such early start times “abusive,” she said, “These kids may be up and at school at 8:30, but I’m convinced their brains are back on the pillow at home.”

Sleep deprivation results in “three strikes against learning,” Dr. Carskadon said in an interview. “Students are not awake enough to attend to information they’re supposed to be learning, their knowledge acquisition is impaired and their ability to retrieve information is reduced. What is learned during the day is consolidated during sleep.”

So, after having too little sleep on school nights, teenagers try to catch up on their sleep at weekends. We adults tend to view this as typical teenager behaviour but even this solution can backfire because it further distorts their biological clocks and might make it even harder for them to get up on time during the school week. 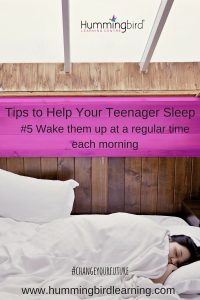 So what can we as parents do to help our children to sleep better?