What I learned on International Women’s Day 2016

Seachtain na Gaeilge has started and in a few days Lá le Padraig will be upon us. This year, with the centenary of Eirí Amach 1916 we seem to have a renewed interest in Irish culture and by extension in our language. So if you think that you don’t have any Irish, here are some hacks to get you going again.

#1 You have more Irish than you think!

#2 Your Irish doesn’t have to be perfect.

Irish is a language and the purpose of language is communication.  I once bought a beautiful hand woven rug in a craft shop in Spain.  I had no Spanish & the owner had no English, yet we were able to communicate because I wanted to buy the rug and she wanted to sell it!  Where there’s a will, there’s a way.  Just start talking in Irish & if you need to put in an English word – put it in!  If you go to the Gaeltacht areas, you’ll find this happening all the time! 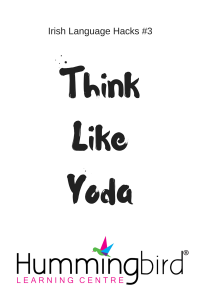 Irish is a very unique language in that it follows a sentence structure that only 9% of the world’s languages follow.  Its structure is Verb Subject Object.  When directly translated into English I always think that it sounds like Yoda speaking in Star Wars.  No wonder the birthplace of the Force is in Kerry!

Unlike English which has over 100 irregular verbs, Irish only has 11.  Once you know them (and you do already), you’re good to go.

Ever wonder which you can never get a straight yes or no from an Irish person – it’s because it’s not in our psyche.  Think about it, listen to people around you.  Even in English we continue with the Irish structure – We’d ask – ‘was John sick yesterday?’  We’d never say yes, we’d say ‘he was / he wasn’t’, An raibh Seán tinn inné?  Bhí sé /Ní raibh sé

Make mistakes, make loads of mistakes. Nobody is going to think less of you. You’re (re)learning a language, you’re going to make mistakes. Think about it when you a tourist asks you for information in broken English. Do you ignore them because they are not speaking the Queen’s English? Of course not.  The grammar will come and once you are speaking in Irish it will become easier to correct those little butúns – see you understood that!!

# The Modh Coinníollach cannot hurt you.

For some reason the modh coinníollach has been built up into this huge scary monster. But the truth is, the modh coinníollach cannot hurt you.  Have you ever thought about what you would do if you won the lotto?  Yes? Congratulations, you were thinking in the Modh Coinníollach.  It is the conditional tense, something happening on condition of something else happening e.g. I would go on a cruise if I won the lotto.  It is that easy. 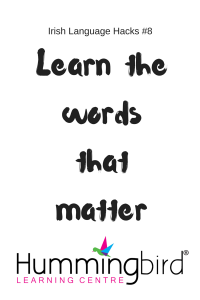 # Learn the words that matter

A new (or forgotten) language means learning lots of new words, which can be very off-putting. But, here’s the big secret, you do NOT need to know all the words of a language to be able to speak it. The reality is that, although you are fluent in it, you don’t know all the words in the English language either. Use the 80/20 principle here, and realise that 20% of the effort you spend on acquiring new vocabulary could ultimately give you 80% comprehension in Irish—for instance, in English just 300 words make up 65% of all written material. We use those words a lot, and that’s the case in every other language, including Irish as well. So invest your time well and learn those words that you are going to get maximum use out of.  You can always learn the rest in the future.

What did we do before the internet?  Want to learn Irish – or any other language for that matter?  You Tube is great, just be sure to get the dialect correct.  If you’re from Munster, then learn Munster Irish! Find native speakers online & skype with them. Watch TG4 – there are some fantastic documentaries on it.

There is an excellent free app called Duolingo, which could a great place to start your Irish language renaissance.

I had it on in the background today while typing this and I found myself thinking in Irish while trying to type in English.  It was a surreal experience because I’m not a native speaker.  I could follow a good share of the interview, they were talking about exporting shamrock from Ballinskelligs & how it was sent to the UK by courier and they agreed , is iontach an system at DHL!

So if the native speakers are happy to throw in the cúpla focal Béarla, you can be happy to too.

If you’ve read all the way down to here you may be interested in ‘The Irish Course™’. It is a innovative approach to the Irish Language incorporating the Hummingbird Learning Method®. We are finalising dates at present so to be one of the first to hear about it just email me at elaine@hummingbirdlearning.com and I will put you on the advanced notice list.